This 56-foot-long permanent public artwork in gleaming aluminum was designed and created by Phillip Godenschwager of Randolph. Mounted on the north side of the New England Central Railroad bridge that crosses over Route 100 in Waterbury, the Express will serve as a gateway piece for the community, celebrating the town’s history and vitality.

“I’m basically a cartoonist at heart, I like animating inanimate objects. My other fascination is architecture. Both of those aspects came together for this project—making inanimate objects have character and working with these interesting historic buildings.” explained Godenschwager, who has been working in the art and design fields for over four decades, including from his studio, Atlantic Art, Glass and Design in Randolph since 1988.

Godenschwager’s “Waterbury Special” was the winning design selected by community members. The idea of an art installation as a gateway to Waterbury has been chugging along for years. In 2017, Waterbury Rail Art Project (WRAP) moved to the fast track, led by Revitalizing Waterbury, a community organization dedicated to preserving, promoting and enhancing the economic, historic and social vitality of the town.

Revitalizing Waterbury, the Waterbury Rotary Club, the Town of Waterbury, American Legion Post 59, and others partnered with the New England Central Railroad to commission it. The Vermont Arts Council awarded an Animating Infrastructure Grant to support the project.

When the project was announced, there was an open call for artists. Godenschwager was among nearly a dozen who submitted proposals.

“The first day, when we had the site visit, the idea came to me,” Godenschwager recalls, seeing how the 102-foot span lent itself to the linear structure of a train paired with the architecture of the town.

For the “Waterbury Special,” Godenschwager identified nearly 20 buildings with aesthetics and community importance suitable for the sculpture. A train featuring all of them in the available space would be long, but not too tall.

The project committee, Godenschwager noted, “gave me the freedom to do it the way I thought it should be done,” thus the scale increased and number of cars decreased to 10. 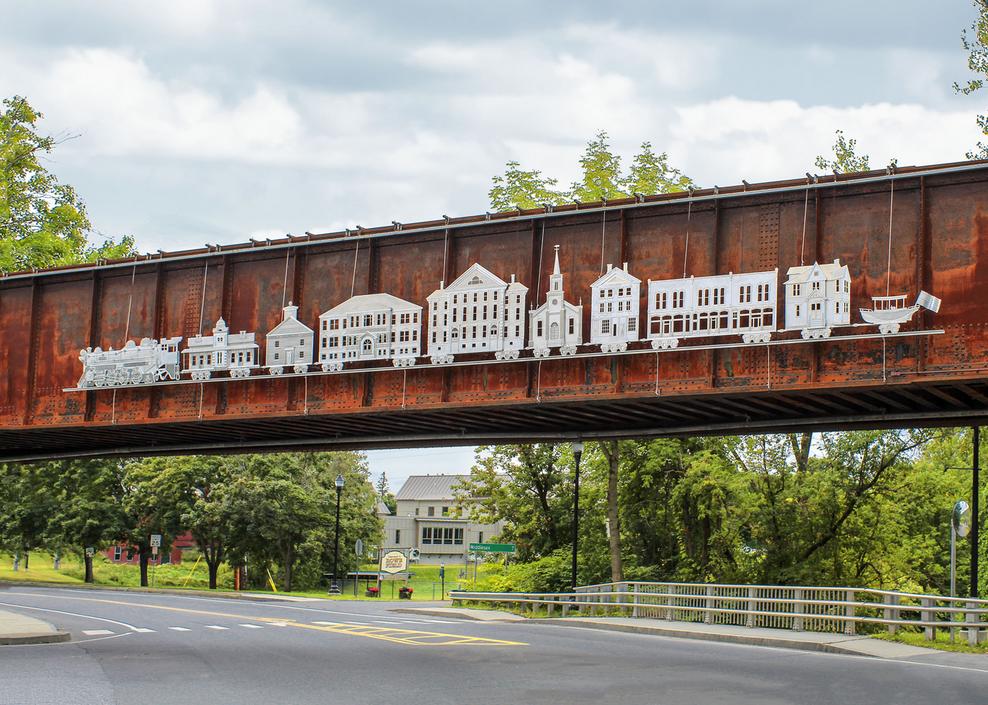 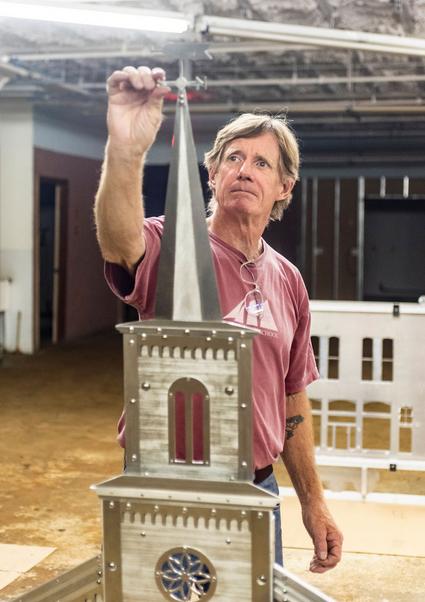 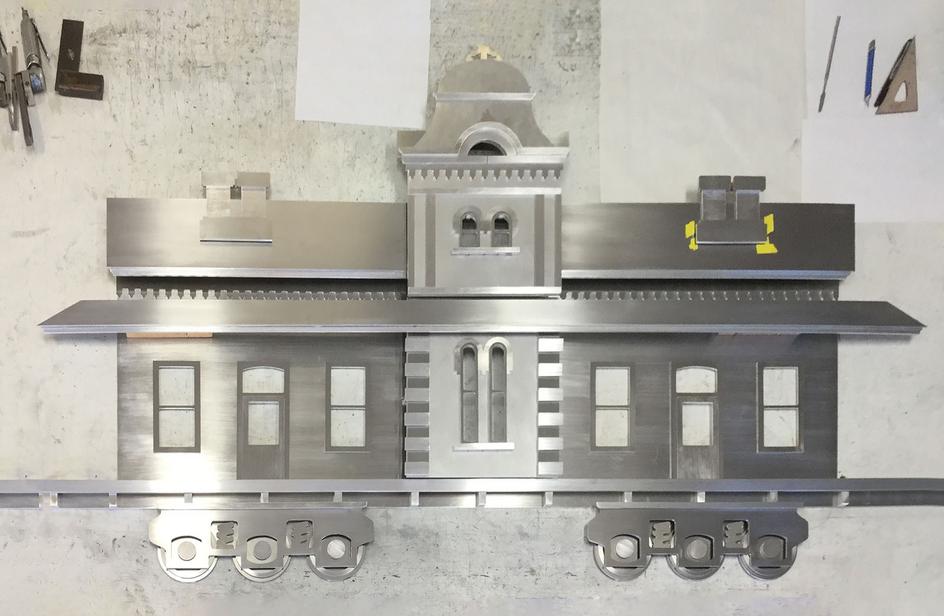 The design for the steam locomotive is based on detailed pencil drawings by a long-ago patient at the Vermont State Hospital in Waterbury of one of the historic locomotives that once frequented Waterbury.

The unexpected caboose, a lovely little steamboat, is based on photographs of steam launches built in the town in the late 1800s. The flag that waves from its stern, Godenschwager said, is a nod to the VFW and American Legion that supported this project.

The eight buildings are beautifully recognizable. These handsome historic structures include the WDEV block on Stowe Street, the United Church of Christ, and other downtown fixtures and also some further afield — the Green Mountain Seminary and Grange Hall. Observed details further add to their charm — the air raid siren atop the Grange Hall, crossed skis on the front door of The Reservoir. As a finishing touch, custom lighting by LEDdynamics of Randolph illuminates the sculpture’s windows and doors at night. 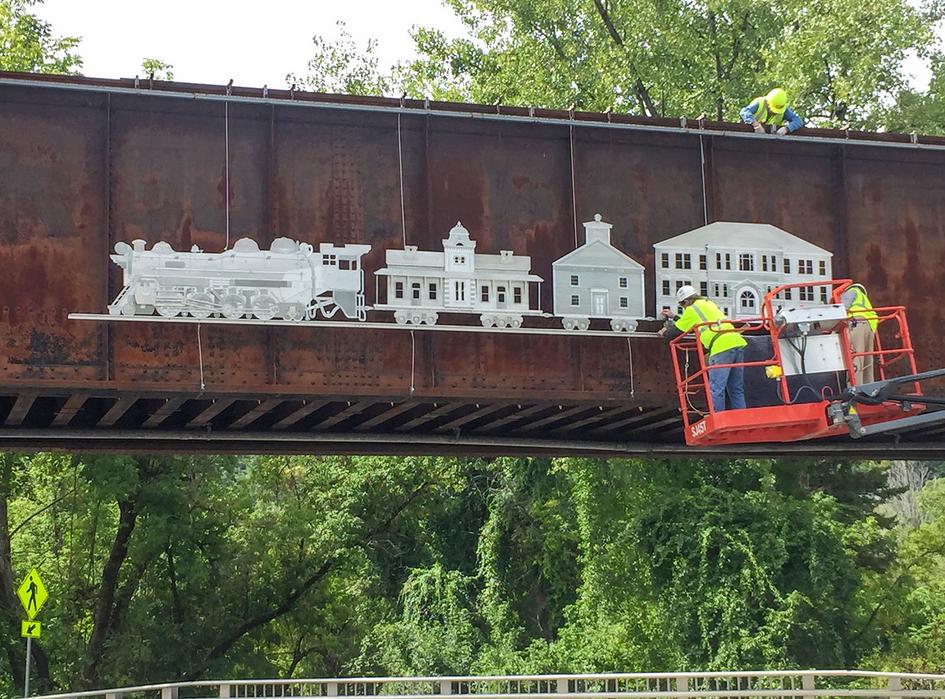 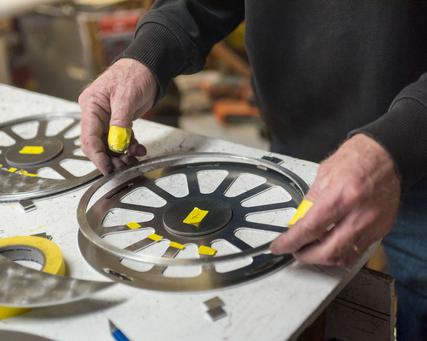