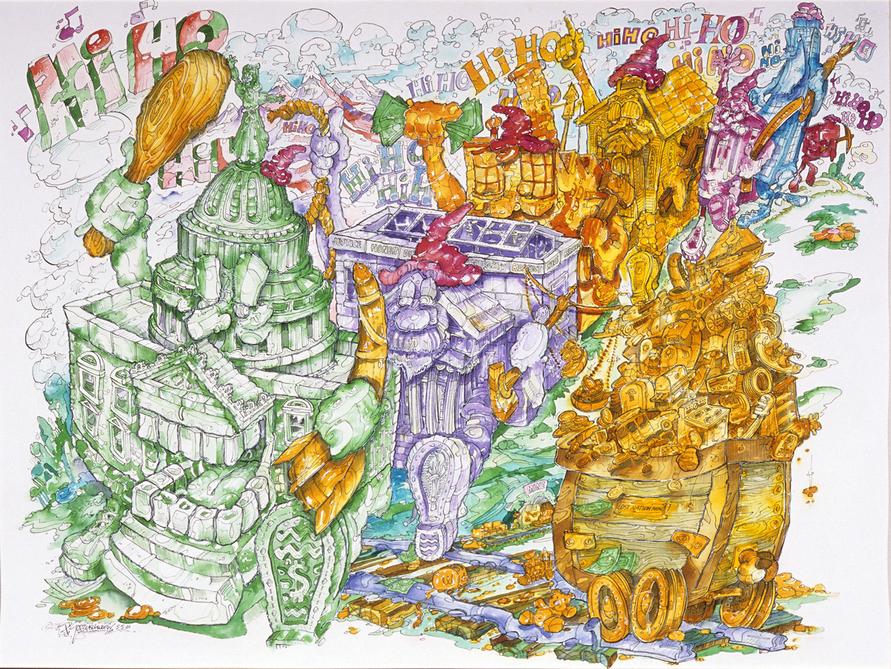 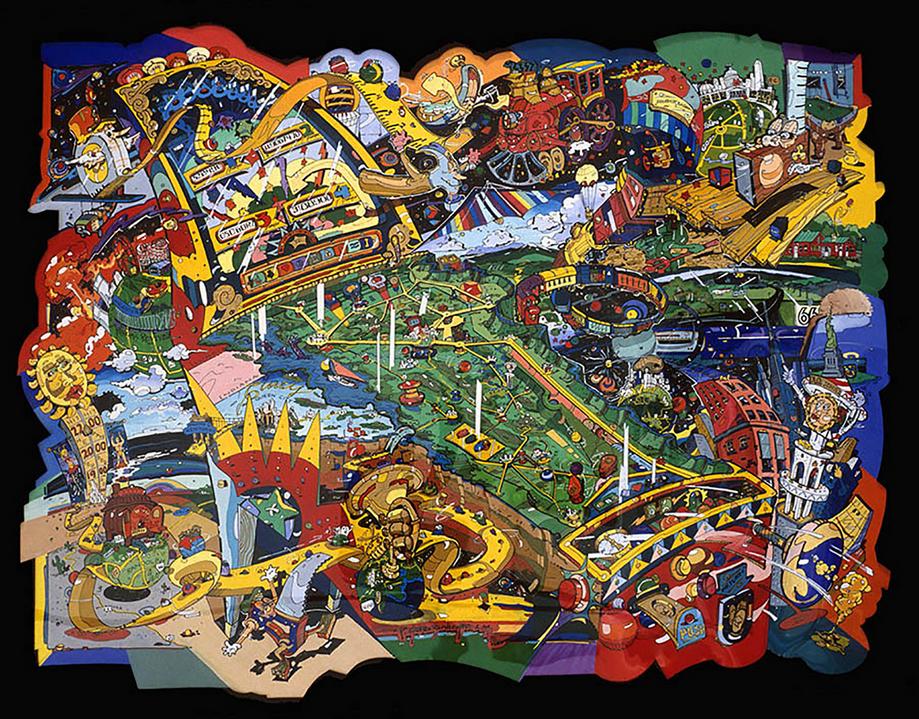 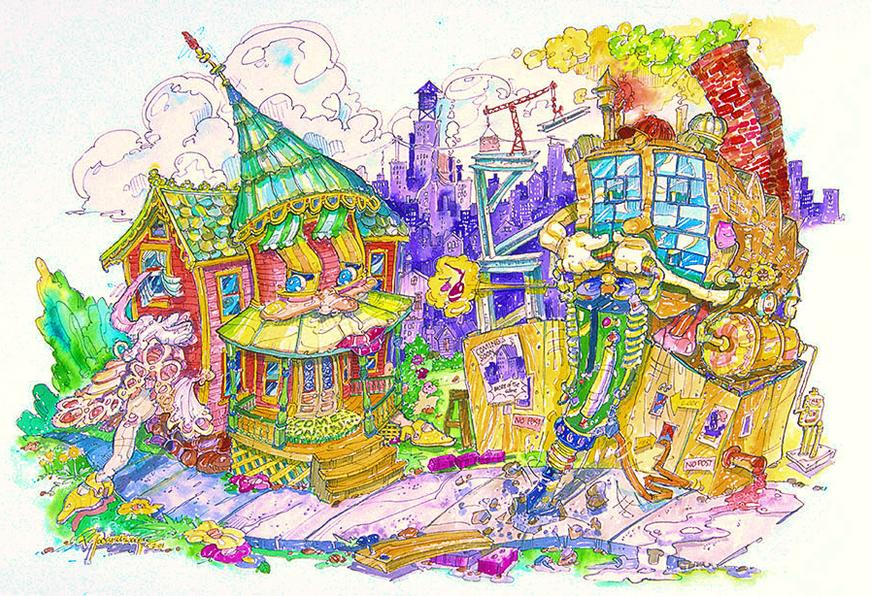 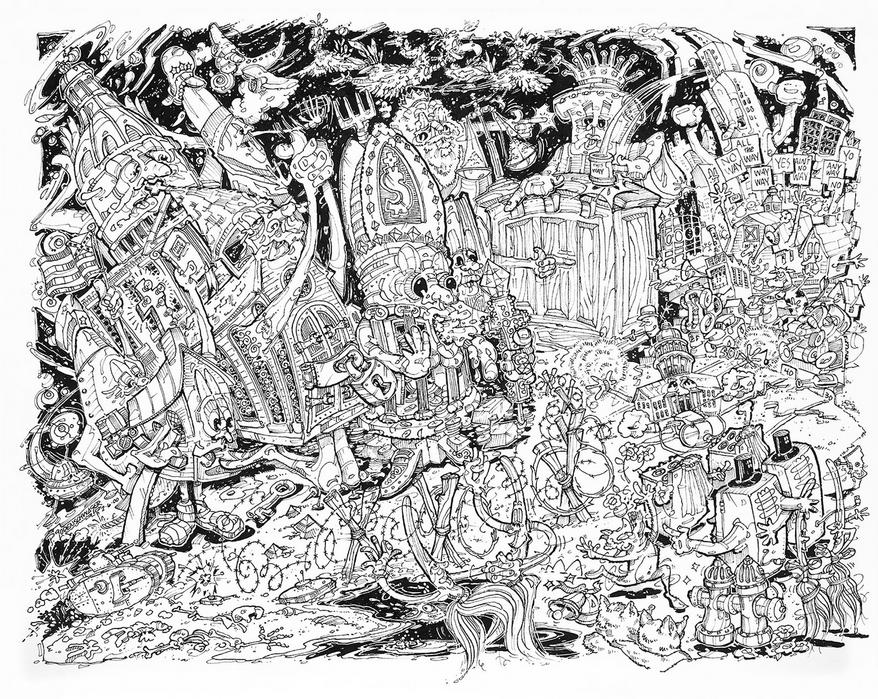 This drawing was conceived on the eve of the millennium and reflects the general hysteria circling the globe at the time. Everything from the end of civilization to the complete meltdown of all the computers which had not been programed to compensate for the change to a new century. Mayhem ensued and then; the sun came out and nothing happened. Who could have guessed?

that old line in the sand 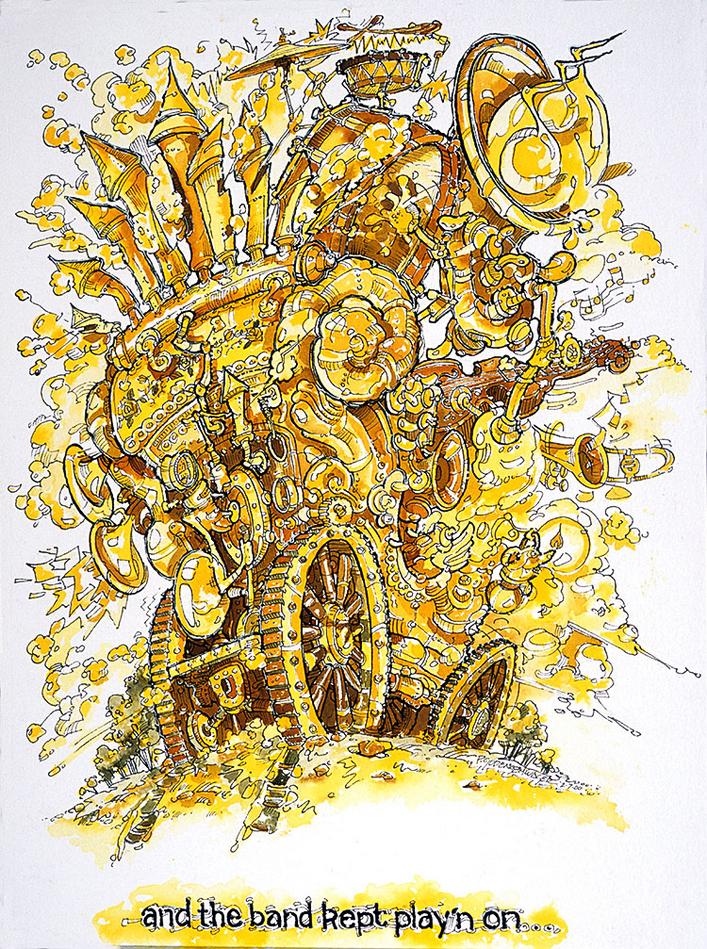 This drawing was made to commemorate a year long road trip made with youthful exuberance. Vermont to Oregon, to L.A. and on to New Orleans and back, following the yellow brick road.

If It's to be a Union,
Let's Make it Civil

This image was made in response to the civil unions debate in Vermont in 2000. In time, Vermont passed the landmark law creating an historic first step in providing for the civil rights of all people regardless of gender or sexual preference. The debate was contentious and heated and reflected the entrenched beliefs and misguided assumptions of many different constituencies. The Vermont Supreme Court came down squarely on the side of equality and fairness and the legislature followed with the passage of the first civil unions law in the nation.

Watching and whistling; who can ignore a pretty face walking down the street?

And the Band Kept Play'n On 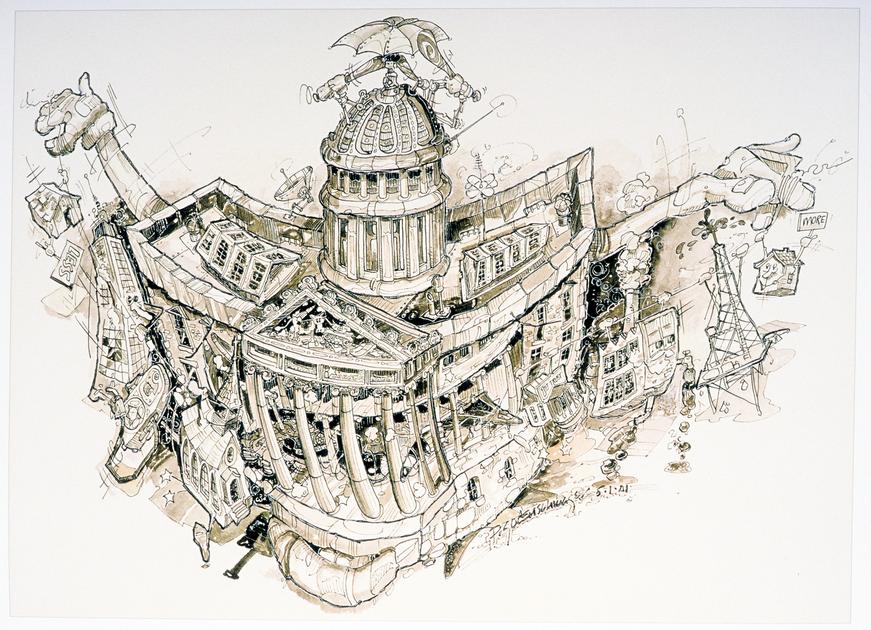 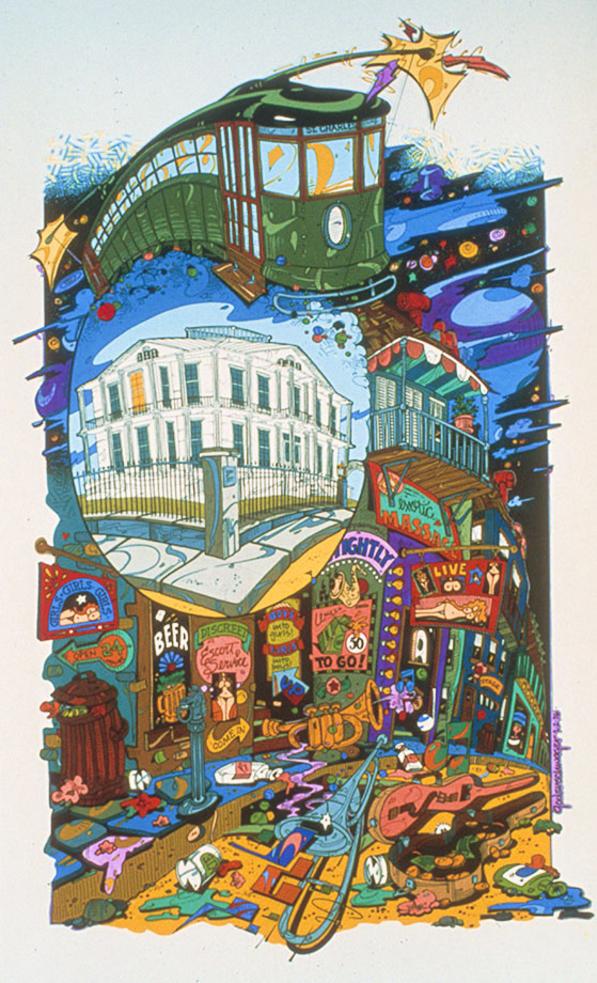 The Vermont Memory Map was created for a juried invitational traveling show of Vermont Artists. The show, of the same name, circulated the state in 1989. The concept was for the artists to put down their own memories and relationship with the state and to interpret the concept of a map to those memories. My relationship with Vermont is grounded in the sense of place that I call home. I have for over 30 years, come and gone, for work, for travel, for adventures, but always to return home. The image of the pinball machine seemed to fit neatly with the idea of shooting out to fly and bounce around the country only to return ultimately to the source of the propulsion. The characters and images surrounding the Vermont pinball centerpiece remind me of those places and events that filled and occupied my time and experience while the yellow brick road always led home, back to Vermont. 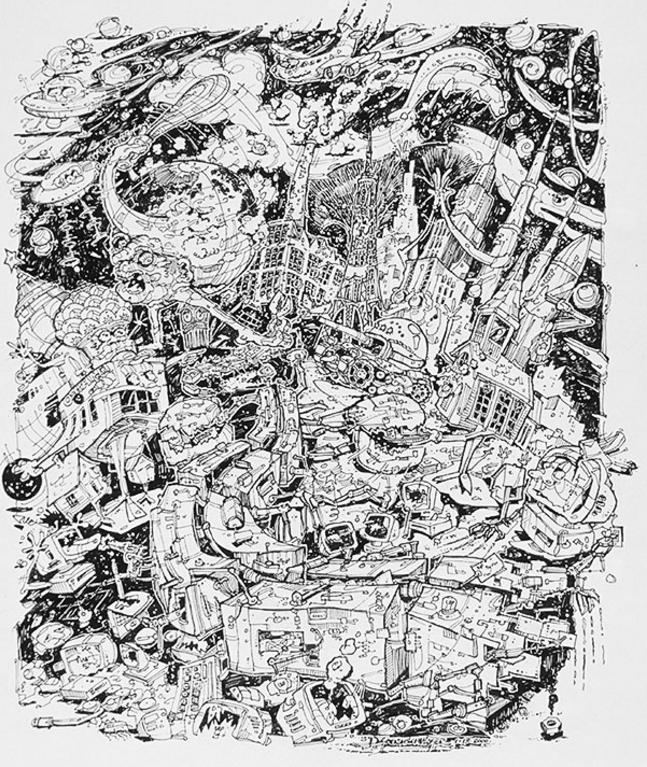 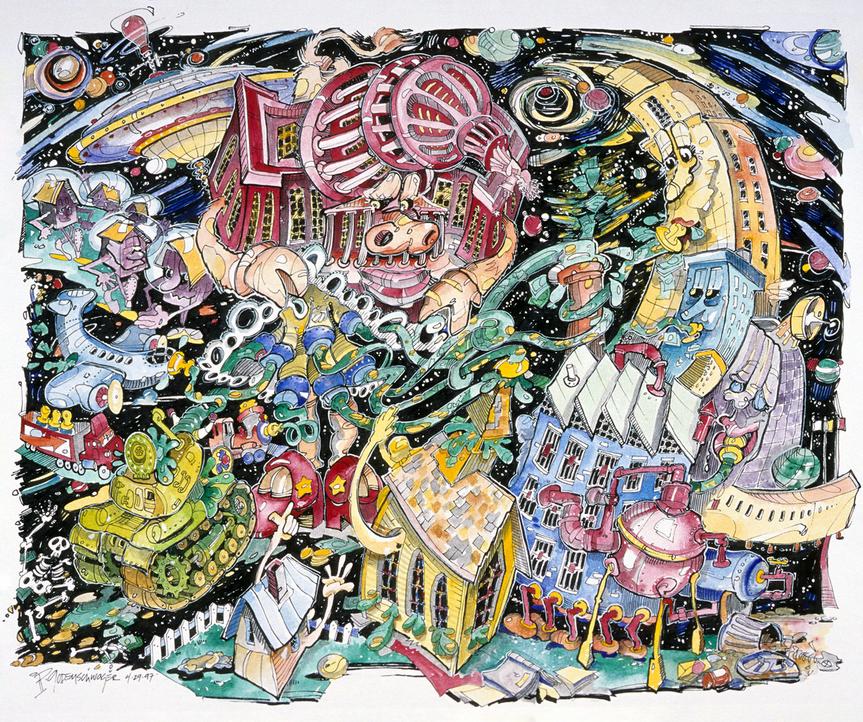 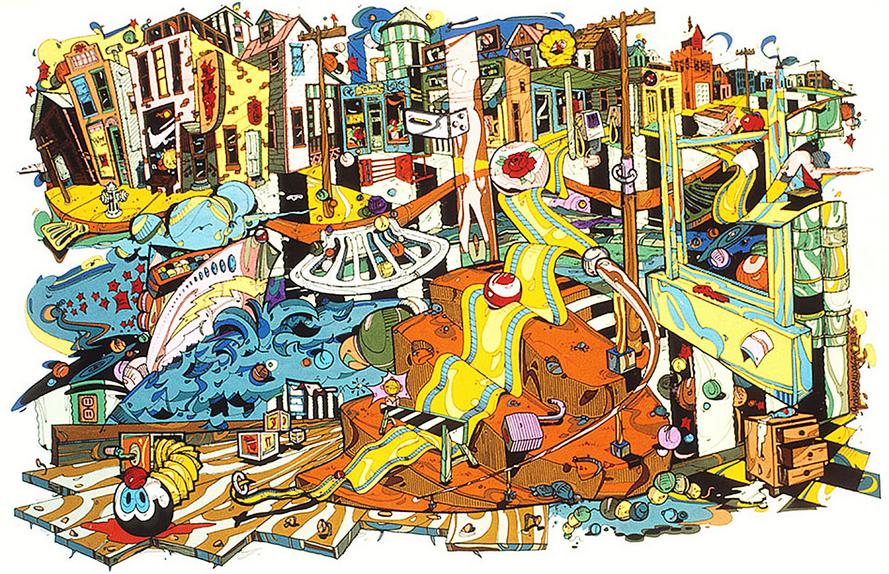 The St. Charles street car line runs from uptown New Orleans to the French Quarter where you can find anything you want and some things you don't. Where anything can happen and usually does. 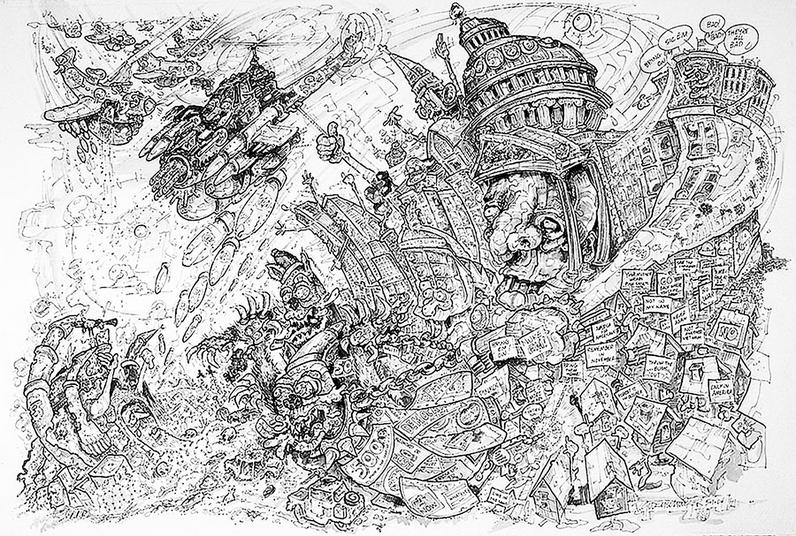